The Evolution of Junkanoo in Grand Bahama

Junkanoo is a Bahamian cultural celebration that includes dance, music, spirituality, and freedom. Though the genuine starting point of Junkanoo has yet to be proven, it is clear that the festival started with the African slaves.  In its purest form, it was how the slaves expressed jubilation from their lives of captivity. They were torn from their country and conveyed to a new world. To keep the connection with their homeland, they did what they knew, they celebrated. Today, this festival is celebrated on numerous islands of the Bahamas two major times of the year. It consists of dancers who parade around the streets, in colorful costumes while dancing to the infectious beats created by the goatskin drums, horns, cowbells, whistles, and so on. Junkanoo has been by far the most predominant cultural descriptor that differentiates The Bahamas from the rest of the countries throughout the nation. The advancement of Junkanoo music, dance, and customization have evolved through the years, keeping up with times, in which it has modernized the festival.

Feeling the vibrations of the goat skin drums exhilarate through your body as the drummer beats the taut surface of the drum, is sufficient to make them ponder, Where did this one of a kind music originate from? Well junkanoo alongside its music was derieved to The Bahamas by the Africans in the sixteenth and seventeenth centuries and later turned into a sorted out occasion in Grand Bahama in the year 1970. Initially , Junkanoo in the Bahamas was played with goatskin drums, conch shell horns, cowbells,bike horns , and whistles . As it stands , the music of junkanoo is by and large known for its solid drumming sensation, however, the utilization of other Modern Day instruments keeps on being brought into the music.

The First of these modern instruments was the trumpet; truth be told, the trumpet is known as a unique instrument utilized in the music of Bahamian Junkanoo. When looking at the music of Goombay, the music of junkanoo has been passed somewhere around an arrangement of preparing, increased just by going along with one of the numerous gatherings that take part in the march celebrations. Today, junkanoo music has adjusted stage instruments and can be heard in the music of most Bahamian recording artists. This was majorly brought into effect by Tyrone Fitzgerald who went in front of an audience with his band who were completely decked down in costumes. 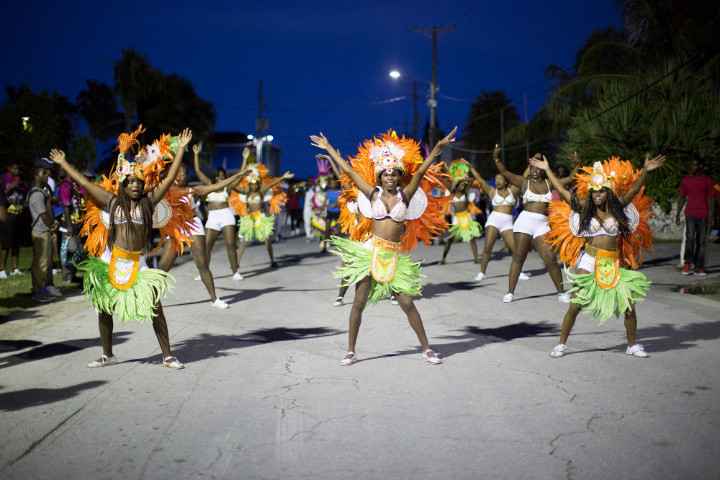 Junkanoo’s choreography always captures the hearts of its viewers. It is one aspect of Junkanoo that people always look forward to and what most youths in The Bahamas await for. The dancing is what expresses the individual’s true selves and gives them self-peace. Although Junkanoo did not have any routines when it was first created, it surely does have fully performed dance routines, and now most of the dancers wear costumes while performing. It was debatable whether or not most dancers would wear costumes while exhibiting, but it now comes down to who feels comfortable with doing it or not.

Mostly, the Free Dancers would be the ones wearing the costumes, while routine dancers would wear simple costumes, e.g. a skirt while performing. Both the free dancers and routine dancers are well loved by the crowds. The Free Dancers are those who really show the deep emotion and connection that Bahamians have for Junkanoo (Kruthoff). They are freer spirited and open when it comes to performing, rather than the dancers who have to stick to their routine for the entire parade. Be that at is it may, it is the ending of 2018 and the dancers still play an important part in Junkanoo history, and it has been the most unchanged thing in Junkanoo since the beginning.

In the past decade, Junkanoo has experienced its difficulties advancing due to numerous factors affecting the economy of Grand Bahama with hurricanes at the root of the problem. Consequently, the frequent occurrences of hurricanes in the nation placed a major strain on the economy of Grand Bahama, resulting in a domino effect as many different sectors were adversely affected. Sadly, one of the issues faced was the increase in unemployment which shifted the priority of the Bahamian people. As a result of such circumstances, funding for Junkanoo has not been as easy to come by and the time invested in the craft has decreased. 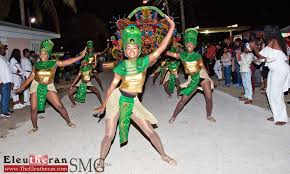 Due to the financing being affected, Junkanoo parades has staggered halting any sort of evolution. The once flamboyant, beautiful and well-organized costumes have currently become difficult and expensive to make. Due to this fact, Junkanooers have turned to colorful and decorative shirts rather than the typical costumes. In the last decade, the toll that hurricanes have put on Junkanoo has halted any development and more so diminished it in terms of costumes.

Regardless if Junkanoo’s seen as a celebration of freedom or just a competitive sport, there is no doubt that without the development of music, dance and customization, Junkanoo wouldn’t have the capacity to keep its place on the world stage today. Numerous Bahamians, especially the individuals who don’t take an interest in this thrilling celebration would contend that Junkanoo has changed excessively and is taking the very meaning of Junkanoo with it and replacing it with aspect from different cultures. However, evolution is significant to Junkanoo and will keep on developing to suit the generation of Junkanoo. To keep the spirit of Junkanoo alive, we must continue to evolve and embrace the evolution of the festival that was given to us by our ancestors.

The Evolution of Junkanoo Costumes